I write a fortnight before Christmas Day, December 25th, the celebration of Jesus’ birth. Or is it?
In fact, according to the solar calendar we now use, the correct date is September 11 (perhaps Osama bin Laden had a similar thought?).
Whenever the real date was, Jesus’ birth foreshadowed his violent death some 33 years later.
Both Jesus’ birth and his death had been predicted on earlier occasions in several Biblical passages .
But for the overwhelming majority of us the timing of our death is out of our hands.
However, one out of 10,000 decide to end their life by suicide. Many of us know someone whose life ended this way;
for me a friend I spent a lot of time with at college, hanged.
For Lynne, her grandfather, gassed in his kitchen.
And on 27 November 2011 Wales’ football manager Gary Speed took his own life.
He was a talented footballer who decided to get involved in the managerial side of football following a successful playing career. Until he killed himself he was the manager of Wales.
Exactly what became too much for Gary we don’t know; but whatever it was resulted in him hanging himself.
All we can be sure of is that as with all suicide cases the reason is complex, and will certainly be perverted by the media in their desire to sensationalise a story and increase sales.
By chance Lynne and I last weekend saw It’s a Wonderful Life (voted the most inspirational US film of all time by the American Film Institute).
It was our annual viewing of this film, in the lead up to Christmas.
Like Dickens’ A Christmas Carol (which I wrote about last Christmas) it puts us in the necessary happy and sad mood appropriate for the festival.
The plot revolves around George Bailey (James Stewart), a man who (for perfectly understandable reasons) is on the verge of committing suicide. He is rescued from doing so by trainee angel Clarence Odbody (Angel Second Class). As a reward for this good deed,
Clarence hopes to earn his wings as a fully-fledged angel. 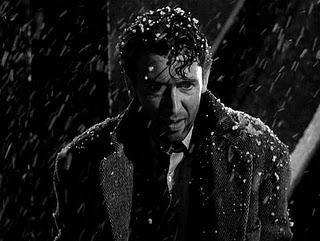 What drove George Bailey to the brink? Well, he was a big hearted man, and the only thing stopping the villainous Mr Potter from getting his hands on everybody’s money in the small town Bedford Falls. Following the death of his father, Bailey reluctantly took the reigns of the family’s Buildings and Loan company, so the less-fortunate folk of Bedford Falls will have someone to rely on: without Bailey, they’d all be at the mercy of Potter, whose miserly ways would see them all up to their eyeballs in debt. But on Christmas Eve, George misplaces $8,000 and finds himself on the brink of ruin and facing a prison sentence.


It isn’t long before he finds himself perched on the side of a bridge, ready to take the plunge and end it all…
Before this scene it’s impossible to see George as anything other than an archetypical anti-Scrooge, friendly and loving to all. Whether it be losing the use of one ear when saving his brother from drowning, or casting aside his dreams of travelling the world so Potter cannot take over the town, George is incredibly virtuous.
Of course, such self-sacrifice can be difficult to swallow, and some of the film’s finest moments come as George realises he will be stuck in Bedford Falls forever: watch Stewart’s subtle mannerisms as George’s brother returns home with a new wife and brand-new job, ensuring George is saddled with family responsibilities for life. It’s heart-breaking stuff…
There are further similarities to Dickens’ classic tale of Christmas redemption: as George is ready to end it all, Clarence Odbody, the ingeniously-named angel arrives to guide him to safety.
Remember that Scrooge saw the ghostly visions of Christmases past, present, and future?
Similarly, Clarence shows George an alternative version of his home town, Bedford Falls in which he had never been born. The town – now renamed Potterville – is like a mini Los Vegas, and is much poorer without George’s selfless influence. As George learns the lesson that life is a gift, his manner is uplifting and sweet, on a par with Ebenezer Scrooge’s post dream redemption.
The moral of the film is that the worth of a life is measured by the impact it has on the thousands of others we make contact with during our lives. In George’s case the effect was positive. He was a very good egg. Gary Speed was also a good egg. I wish Clarence could have talked with him before he took his own life, just as he’d talked with George Bailey.
There may have been a different outcome.


Deaths in 2011
There’s been a violent end to many in 2011, particularly in those senseless wars and the heavy handed suppression of riots throughout the world. Some like Michael Jackson and Troy Davis, whose lives were forfeited by another, and others, like Osama bin Laden, Muammar Gaddafi and Raoul Moat whose violent life determined the nature of their death. A late entrant to this notorious list is  Donald Neilson – the black panther, who slept at the bottom of our garden, murdered our much loved sub-postmaster in 1974. In prison since 1976, pneumonia took him away last weekend.
On the other hand I remember with admiration the sporting talents of Sócrates, one time Brazilian football captain, as well as boxer Joe Frazier, and Jimmy Adamson, a Burnley football legend.
Artistically, I also remember Keef Hartley (who died at the young age of 67), Ken Russell, Peter Falk (Columbo), Elizabeth Taylor, Gerry Rafferty and Amy Winehouse. I only recognized Amy’s creativity since she died. At 28 she was was just 2 months older than my youngest son, and lived in the next village in north London. I have grafted her excellent interpretation of the Beatles’ All My Lovin’ as backcloth to the blog if you are viewing this blog through www.robertarmstrong.co.uk.
Jean Smith, our next door neighbour, died suddenly last January. Only hours before her death she was sat in our front room as I demonstrated to her the beauty of the slow cooker, which I’d recently given her.
On the business side I will remember with sadness the deaths of Steve Jobs and Colin Doyle, two inspirational and motivational businessmen.
Most importantly, the man who had the greatest effect on my life, John Stott, died mid year.
All these people impacted my life, and died in 2011.


As for our immediate family, granddaughter Harri continues to come on leaps and bounds in Nanna’s literacy, numeracy and good behaviour classes. Her sister Verity, a graduate of Nanna’s class from last year began school in September and is now on her fifth reading book at Level 2. To be honest it’s no surprise when you consider the support and talent of those immediately around her. The only surprise is why the family don’t open their own school, but the rate at which Chancellor George Osborne is cutting back the education budget may result in this suggestion becoming more than a quip!

I hope that both Verity and Harriette develop the talents needed to survive in an increasingly dangerous world.


A final scene in It’s a Wonderful Life shows George discovering a gift from Clarence, a copy of The Adventures of Tom Sawyer with the following inscription:


“Dear George: Remember no man is a failure who has friends. Thanks for the wings! Love Clarence”


My wedding ring is inscribed Love, Loyalty, Friendship, but that’s another story, which I’ll finish next year!